When I launched ChicFlicks, I was pissed off. I was tired of my fellow female business owners feeling inadequate and afraid to get in front of the camera.

Without fail, every one of them worried about their weight, or hair, or makeup, or sounding stupid.

Without fail, every one of them launched a business that was successful, that created income, that helped other people. This was a huge disconnect. And I was just as guilty.

Here I was, telling women they had something of value to share, that they should just get themselves in front of the lens and forget about all the insecurities, but I was reluctant to heed my own advice.

I picked a day, scheduled my own shoot, and made my commitment to follow through. For weeks before the shoot, I had to talk myself into a state of confidence. I had to deal with the feeling of dread that was bloating inside my stomach. I had to find the power to look confident in front of the camera.

Here’s what I did to get over myself and what you can do too. 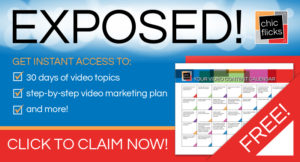 Get started with 30 days of video topics! 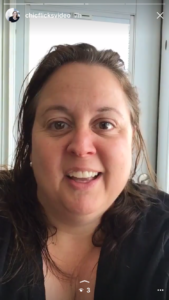 Showing up, fresh from the shower, when I’ve got something good to share.

I may not have pulled off my first video as professionally as I wanted to, but I got it done. It was extremely uncomfortable and I required a lot of takes. Now, after seeing myself on video so many times, I will show up fresh out of the shower, without makeup because I am so eager to share whatever pops into my brain.

Want to know more? Subscribe to our newsletter for DIY tips, App reviews, ideas for video and special offers. 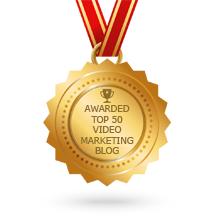